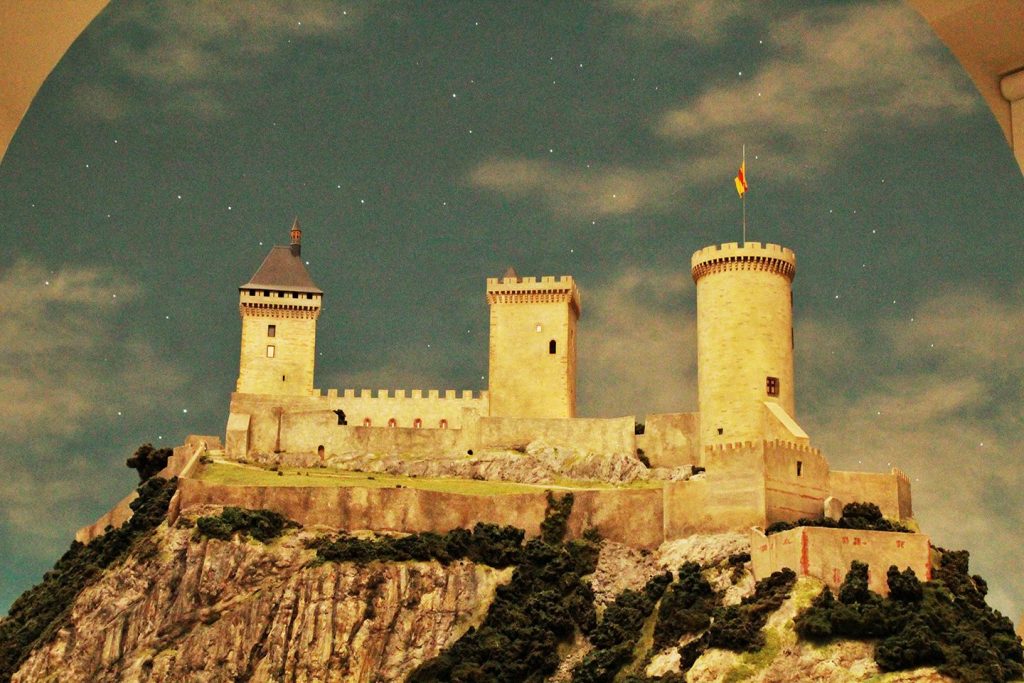 In the heart of the town of Foix in the Pyrenees, perched on a rock and overlooking the valley, is an impressive Medieval castle: the Chateau de Foix.
Even before entering the city, the imposing stature of the castle dominating the valley catches the eye of visitors and impresses with its height. With three large towers and unshakeable walls, this little gem of Ariège heritage has withstood both enemy attacks and the cogs of time. Its interior, completely redesigned as before, will give you the impression of being in the Middle Ages.
It is therefore an essential stopover in Ariège, being just 5 minutes from our Hotel Pyrène!

Probably built at the end of the 10th century, this castle originally had a single tower. He allowed the then earls to impose their authority and their implantation in the region, since from the top of its rocky outcrop, the castle had the reputation of being impregnable.

Yet the richness of its territory has often been the object of much envy. First the home of the Counts, this marvel of medieval architecture later became the refuge of the Cathars.

The second tower, wider and taller, was built in the 12th and 13th centuries. It then made it possible to once again welcome counts, such as the famous Gaston Phoebus, the most famous of the counts of Foix-Béarn. A man of very strong character, soldier, hunter, builder, and at the origin of the third and last tower, which has the distinction of being round.

Unfortunately, the castle was quickly abandoned before being transformed into a barracks in the 16th century, then a prison in the 19th century.
Even today, we can still observe the engravings on the walls of the cells, made by the prisoners whose conditions of detention were appalling.

Listed as a Historic Monument and extensively restored to give it back its Medieval allure in the 19th century, in 1930 the castle became accessible to the public to allow everyone to discover its history and the personalities who occupied it. 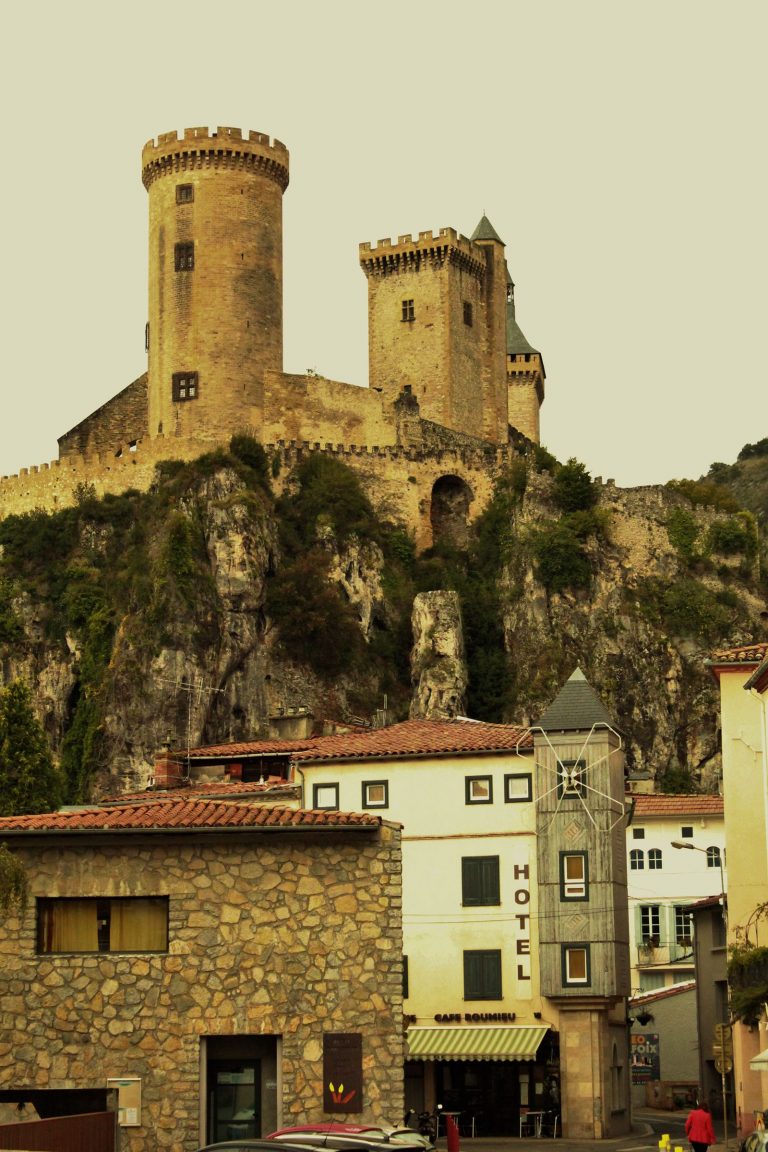 Visit of the interior of the castle

In each room, furniture, chairs, tables, beds and weapons are installed to restore the castle to its former appearance. The equipment was made to measure after a long work of archival research and an inventory of the various known medieval collections. You will therefore be able to discover the great ceremonial hall, the count’s chamber, the hall of arms, the scriptorium, the dungeon, and many more.

Visit of the exterior of the castle

On the terraces of the castle, you will discover exceptional war machines, such as the trebuchet, which allows you to send 100 kg balls over 200 meters, or the pierrière, much faster than the trebuchet, and an impressive treuil à tambour, used for the works of the counts.
These machines operate every day and regular demonstrations are made to explain their history and utility, you can even participate in the demonstration.
But long before you are impressed by these machines, you will especially be struck by the extraordinary view of Foix, its valley and the surrounding Ariege Pyrenees which beg to be contemplated. 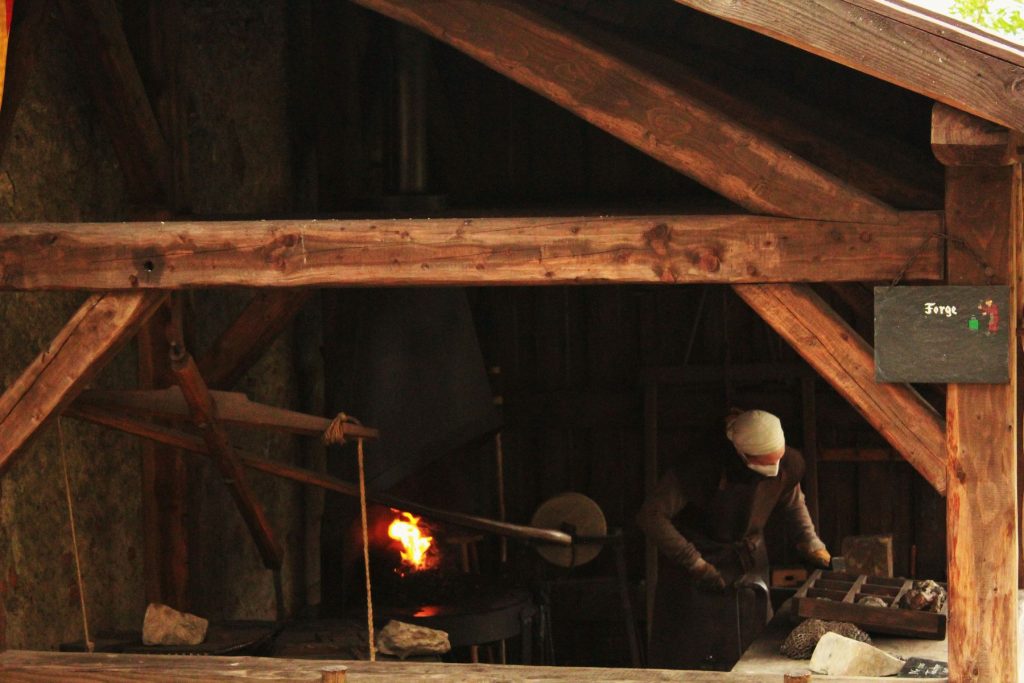 At the foot of the three towers of the castle, fun workshops are offered every day. They are animated by characters straight from the Middle Ages and will help you project yourself into the time of the Counts of Foix. You will learn how to use imposing war and construction machines, how to handle weapons such as a bow or crossbow, how to cut stone or even the basics of blacksmithing.

Located at the foot of the site, this space is a meeting between modernity, playfulness, interactive and augmented reality, to allow everyone to learn while having fun. Many stories punctuated with games will allow you to discover in detail the history of the Foix count, the town, the castle, Catharism, but also to better understand daily life and the legends that were told in the past.

There is a souvenir shop in the castle, open at the same times as the latter, you will certainly find what you are looking for, for young and old.

Possibility of leaving your purchases at the store in order to collect them once the visit is over! 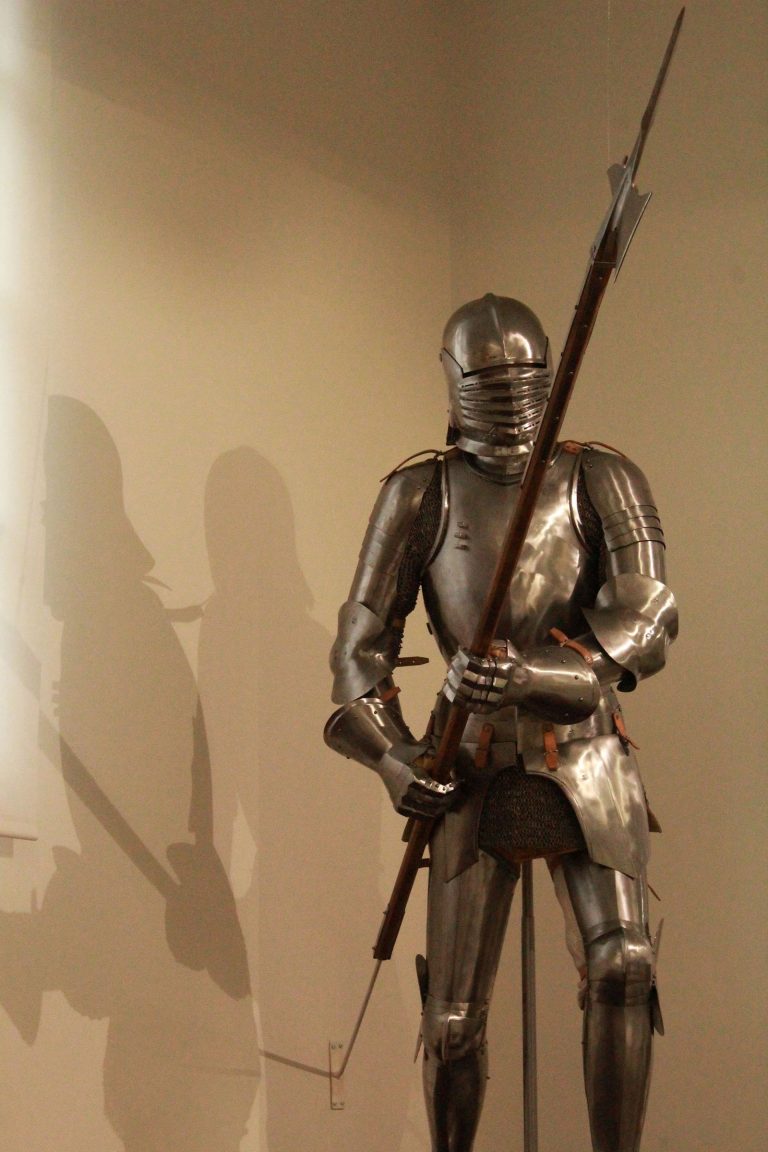 Escape game "The Treasure of the Cathars":

“It is said that the last Cathars would have hidden their treasure, and perhaps even the Grail, at the foot of the castle of Foix. The inquisitor is at the gates of the fortress and you will have an hour, not a minute more (the time he attends mass), to find these remains and put them to safety. ”

Intended for all people who like to have fun, play in a team and solve puzzles, whether with friends, colleagues or family, this medieval escape game will allow everyone to experience the Middle Ages for a moment, through of clues, puzzles and other challenges as original as they are quirky.
This game is located in the museography area, the team can be made up of a maximum of five people. It is accessible to children as well as to people with reduced mobility. Mandatory reservation. 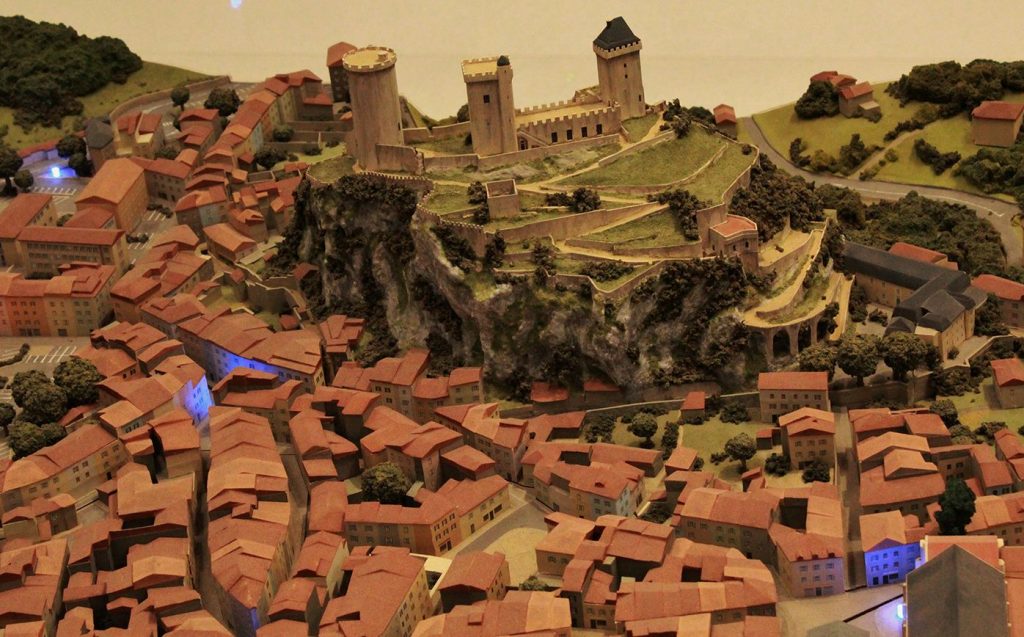 The castle offers temporary exhibitions within it.
To not miss them: refer to “Contact & social networks” a little further down on this page.

The visit takes place indoors for the museum space and the immersive rooms of the castle but also outdoors for the terraces and participatory workshops (covered).
It takes about 4 hours for the full visit. 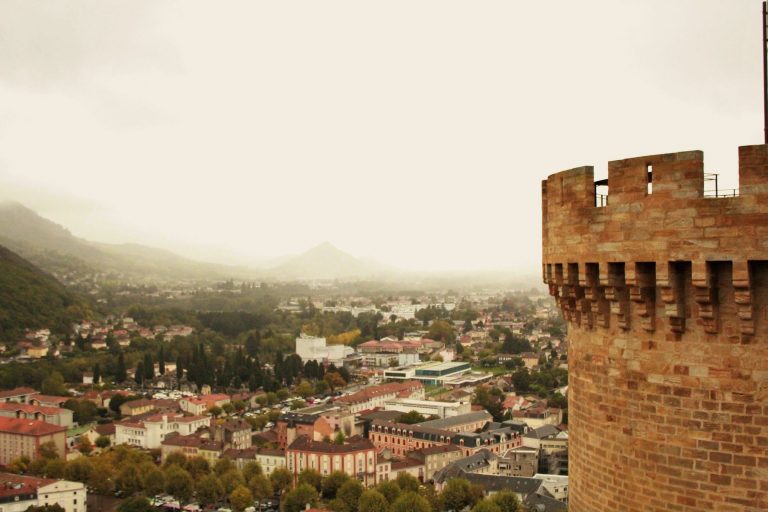 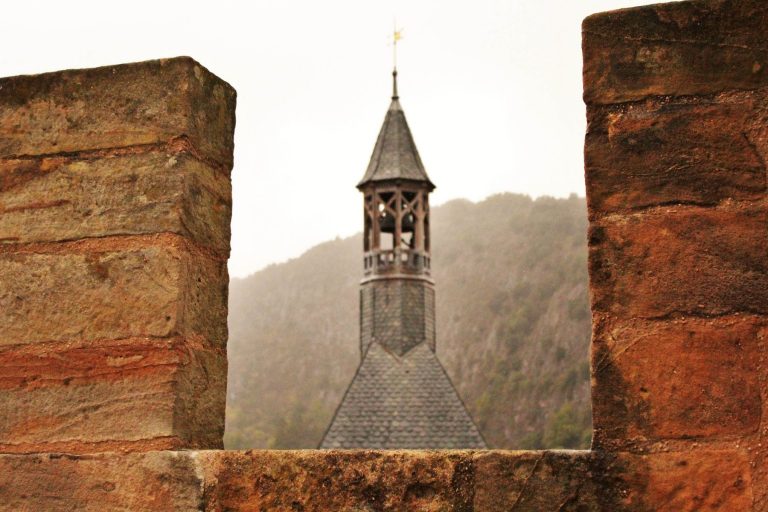 Pets are not allowed within the site, even on a leash.

There are many car parks in Foix and around the castle, some free, others not. 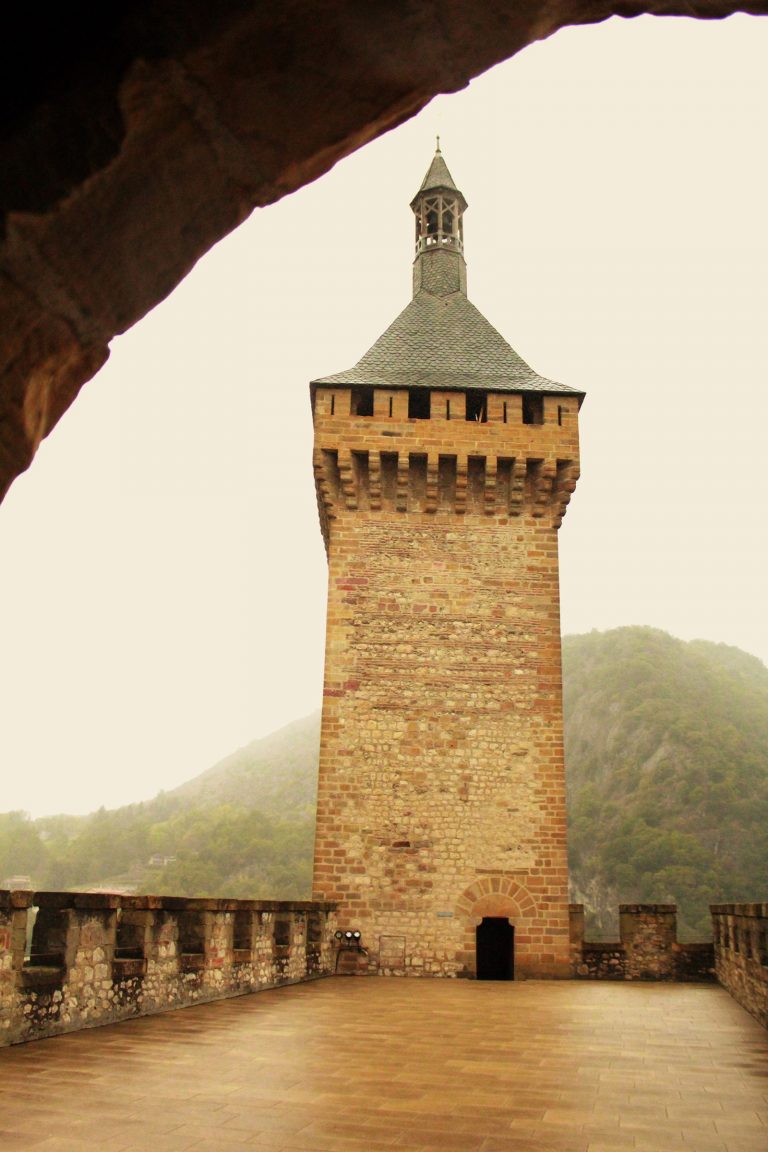 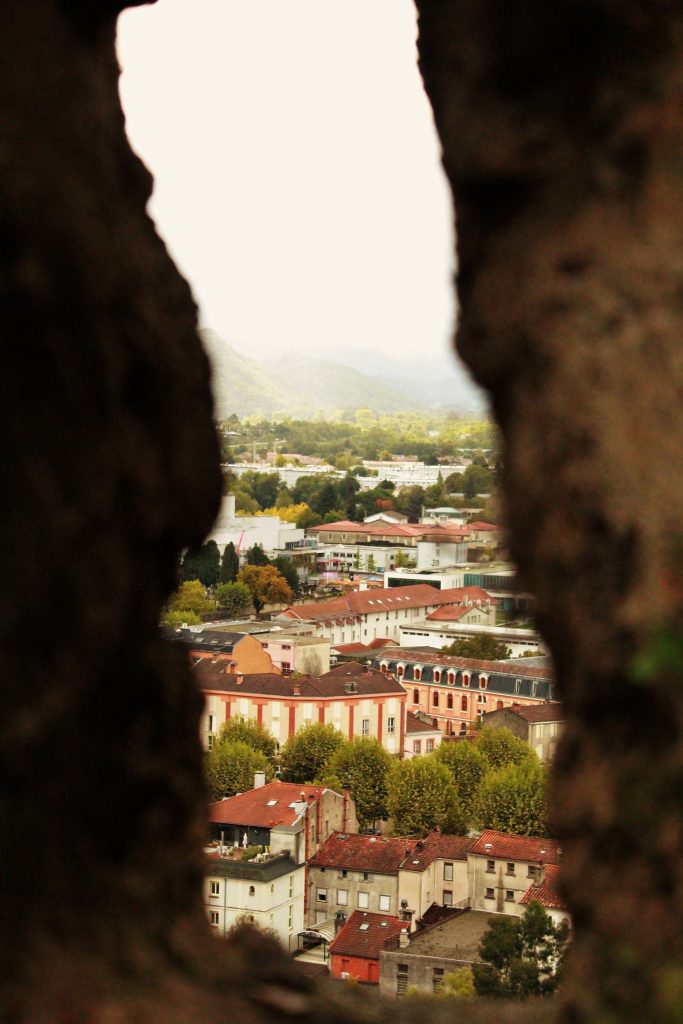 The Château de Foix is managed by the Sites Touristiques d’Ariège. Visit their networks to find out the castle’s opening hours according to the seasons, as well as temporary exhibitions and upcoming events. You can also book your tickets online through the website.
Château de Foix
09000 FOIX
Phone : +33 5 61 05 10 10
Mail : info@sites-touristiques-ariege.fr 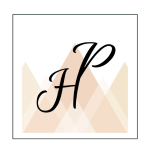 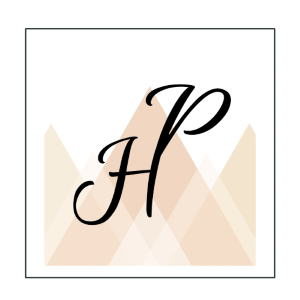